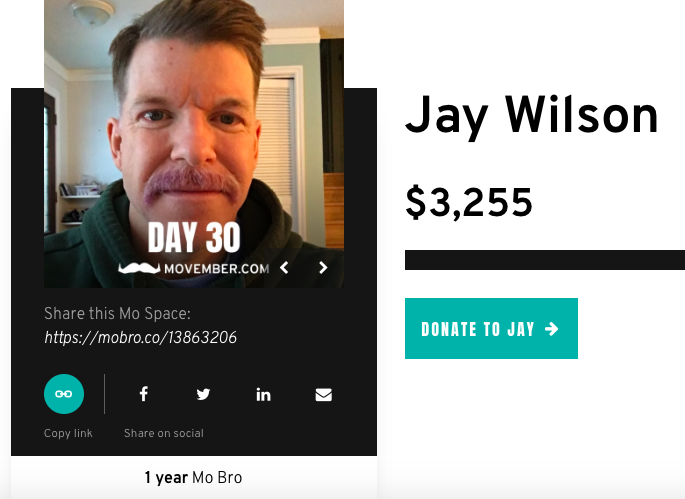 I posted earlier about my prostate cancer diagnosis, and Jay Wilson took it up as an opportunity to raise funds through his first ever Movember campaign page.  Jay raised more than $3200, which was astonishing to both of us.  He had to keep raising his target and the incentives (including dyeing his ‘stache a really awful shade of purple) to keep up with the donations.  I know most of the people who donated, and I realize a part of their motivation was to show their support for my own diagnosis, treatment, and recovery.  I hope you all know how much every one of those love letters meant to me. And Jay already knows what his support means.  Thanks, brother.

I was also humbled to learn that old friend Brad Wuetherick, whose Dad has been struggling with the disease for a long time, also included mention of my situation in his own Movember campaign page, which he’s tended for several years.  Thanks, Brad, for your tangible support and ongoing friendship!

Jay and Brad are people who find ways to do the right thing and throw support to their friends at the same time.

And for the record if you’re curious, I’m doing fine.  I had surgery on November 16, and every indication is that it was completely successful. I’m already well along the road to full recovery. And that’s due to a lot of friends.  Thanks, everyone.